When we went on our honeymoon to Maui in 2011, I experienced my first doors off helicopter tour.  It was amazing!  Soaring over the mountains, the beaches, the beautiful waterfalls, all while the wind is blowing in your hair.  I had always heard that Kauai was even more epic of a flight with its older more rugged landscape.  I knew when we booked our Kauai trip we would have to do a doors off  helicopter tour of Kauai. 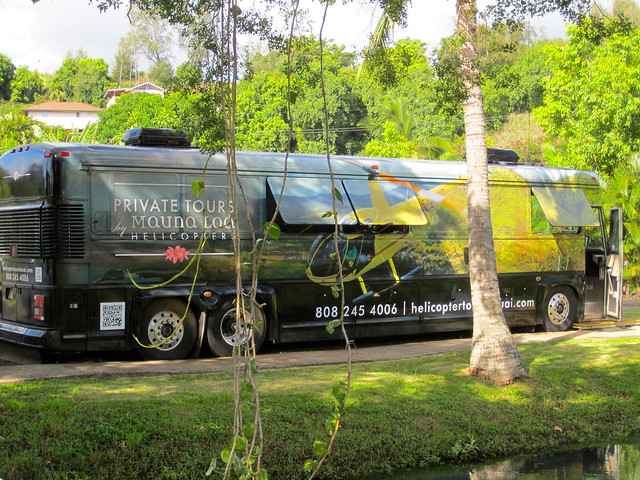 After researching all the major companies, we decided to fly with Mauna Loa Private Tours.  Why them you ask?  They had great reviews online, were in the same price range, but offered smaller helicopters and private tours for groups of 2-3 people.  When we flew in Maui they took 4 people, so I was stuck in the middle seat next to the pilot.  By doing a private doors off helicopter tour, I was guaranteed a window seat!  The tour cost us $548 total for two people and we opted to take off in the morning for the 10am tour. 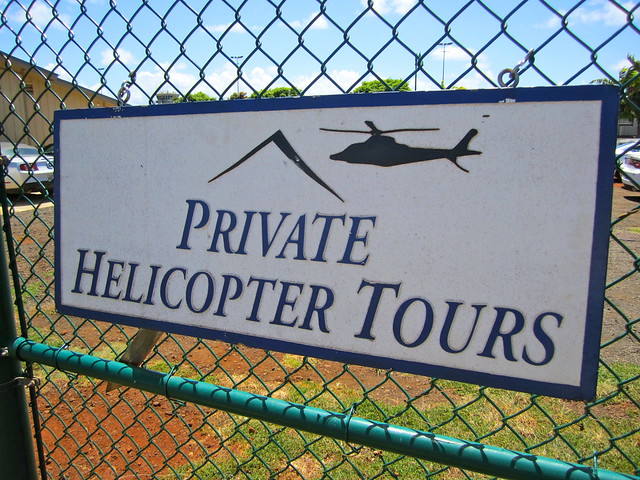 I mean, look how cute and little our helicopter was!! So, funny story.  Last time we rode in a helicopter in Maui, they made us wear jumpsuits and strapped us in to a 5-point harness seat belt for the flight.  This time was so much more casual.  No jumpsuits, hop right into the helicopter and the seat belt, well it was just like a car’s shoulder and lap seat belt.  When the pilot hooked it for me, I had a minor…ok major, freak out moment.  I turned to Alex and asked, “Is your’s just a seat belt?”  “No, seriously,” leaning forward to show it gives, “JUST A SEATBELT!”  He just laughed and nodded, then asked if I needed to get off the helicopter.  I held down my fear and away we went into the air. 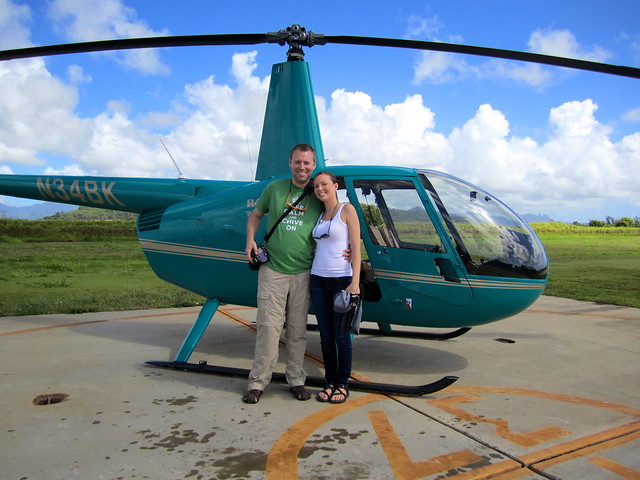 Once up in the air, it is easy to forget the fear as the beauty takes hold… 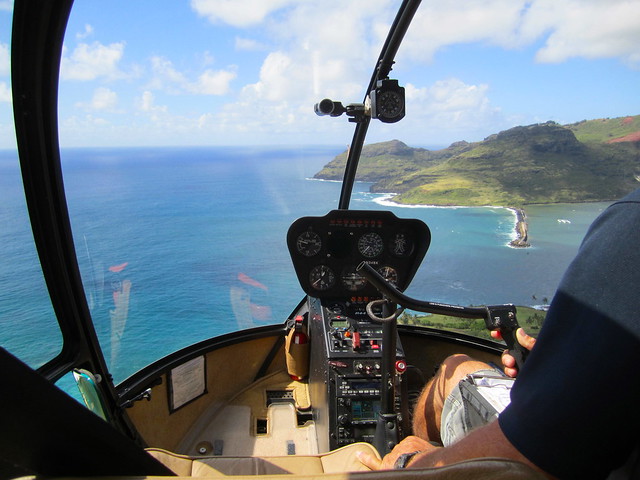 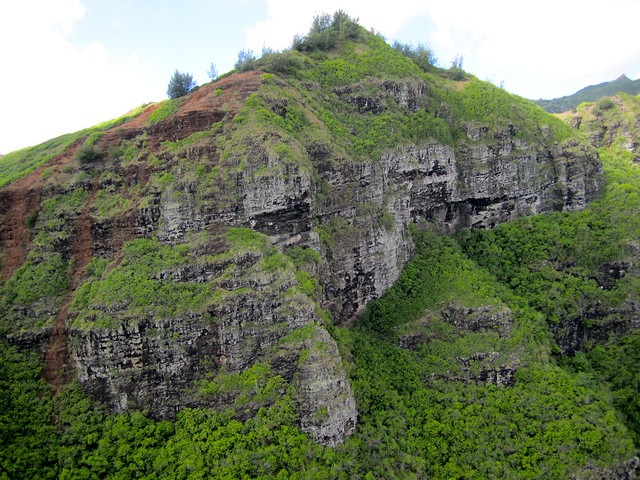 It did not take long to come upon the first waterfall of the day.  This one may look familiar, being that it is the famous Jurassic Park waterfall. 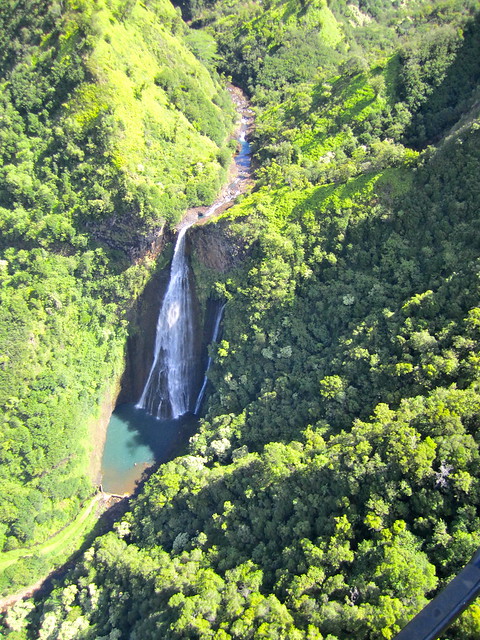 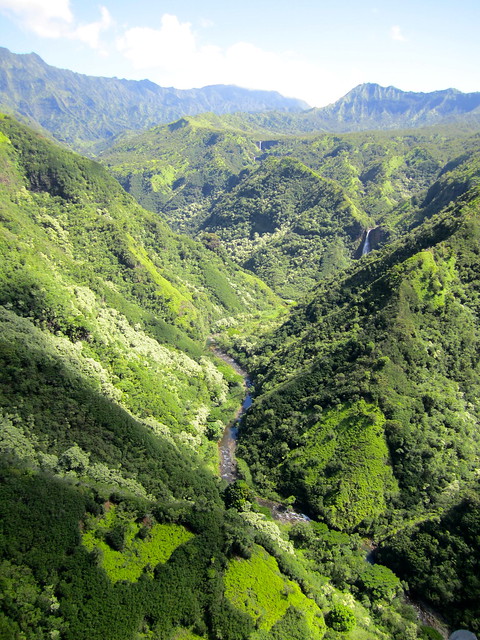 Next up on the tour, look at the Beauty of the Kahili Falls. It is more commonly known as the “Five Sisters” Falls, being five waterfall that feed into each other. 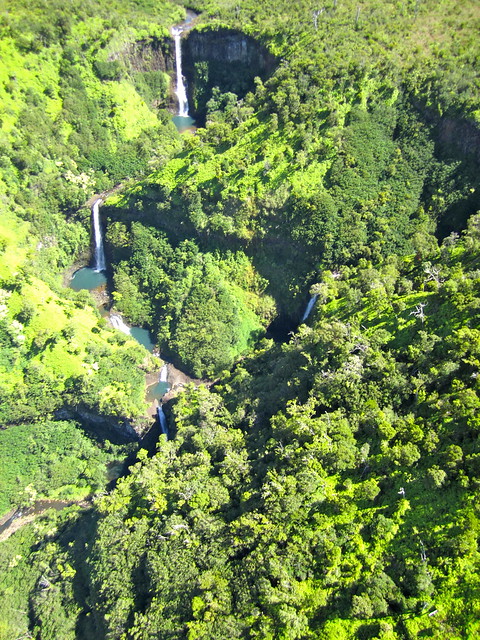 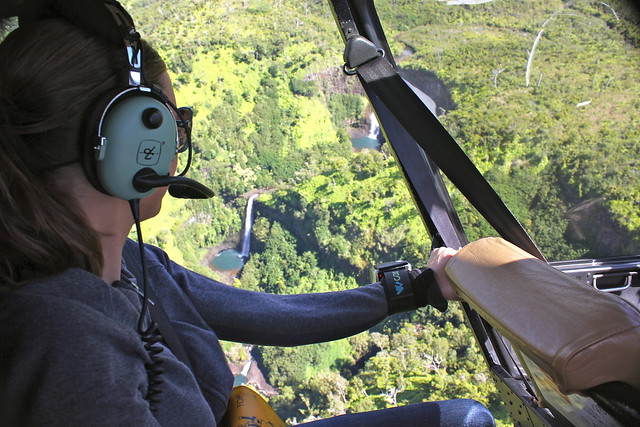 Have you ever heard about the Grand Canyon of the Pacific? I knew nothing about it until researching for our Kauai trip. It is named Waimea Canyon and showcases the rugged beauty of a land created by volcanoes and rivers. 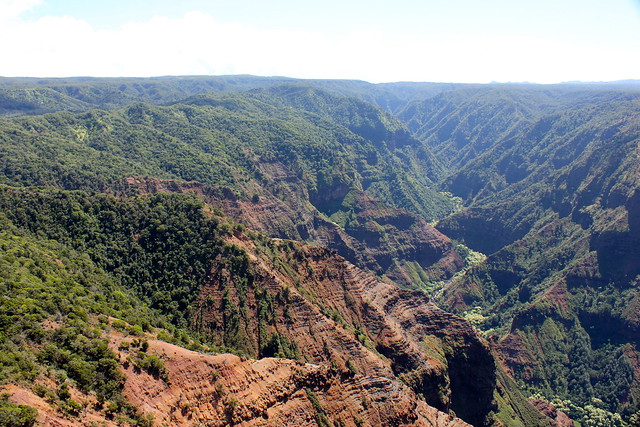 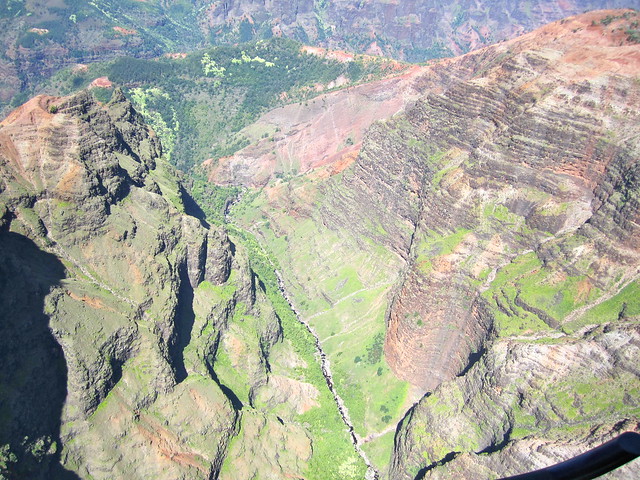 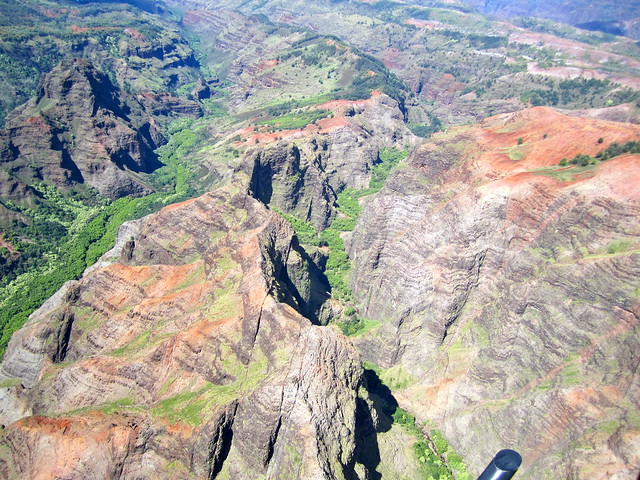 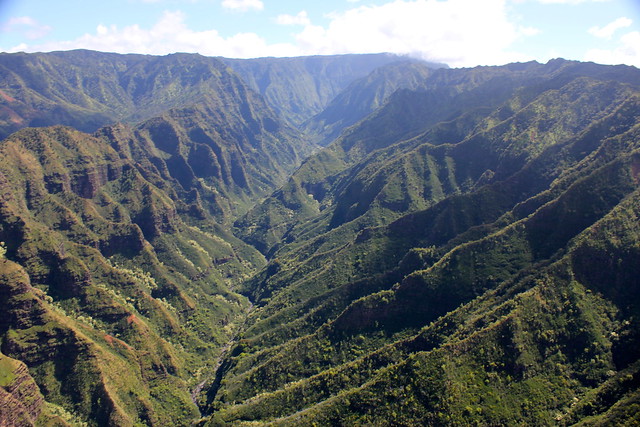 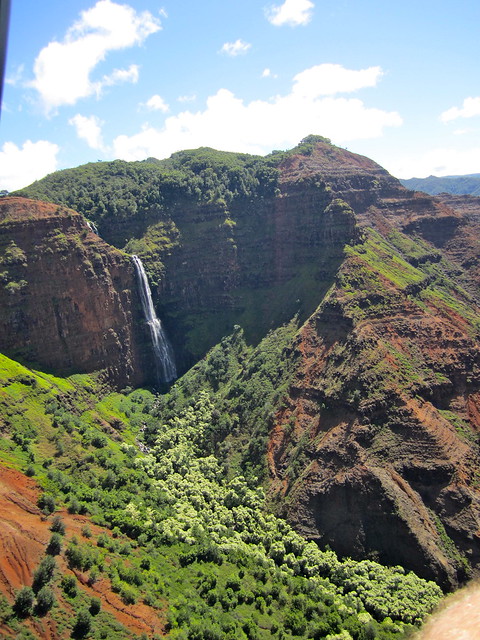 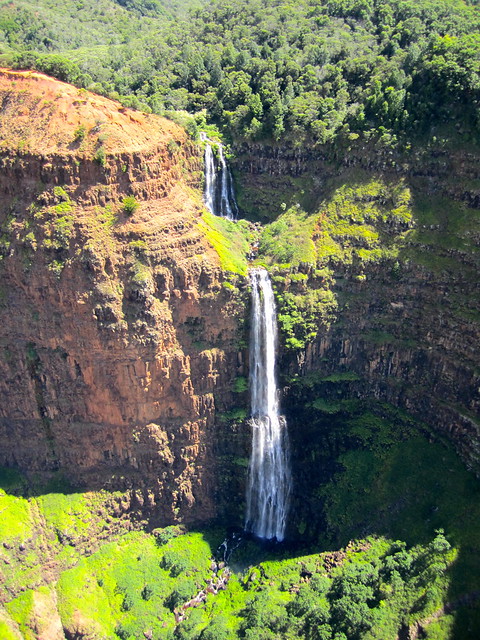 All of a sudden, around the edge of the west coast of Kauai, the Na Pali Coast comes into view in all its glory. Some of the most breathtaking views of coastline on the planet can be found here at the Napali coast. With no access by car, you must view by air, water or hike in along the many amazing trails. 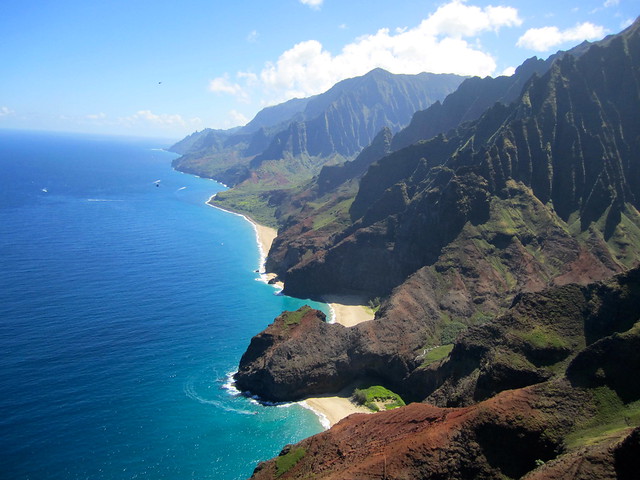 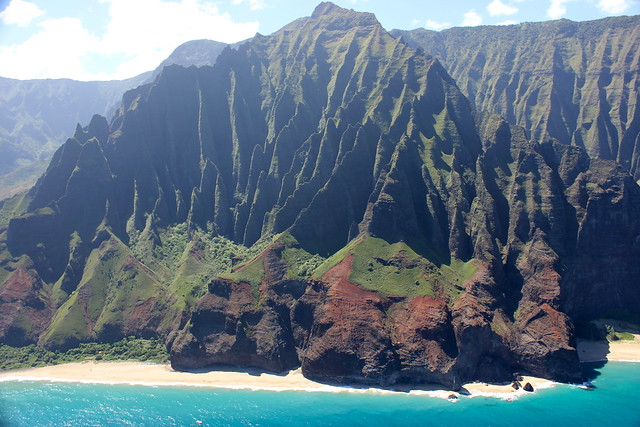 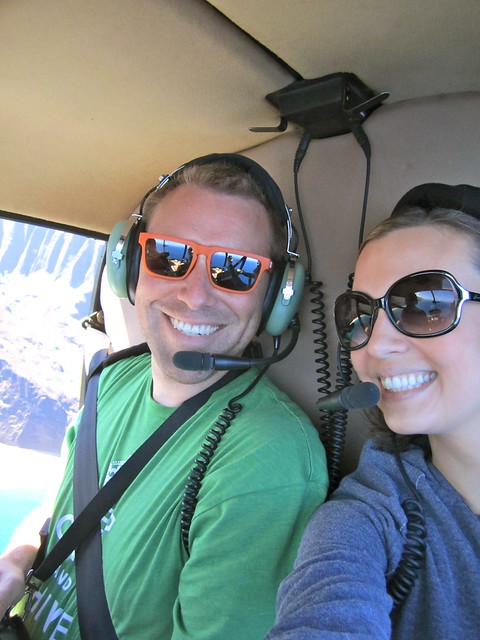 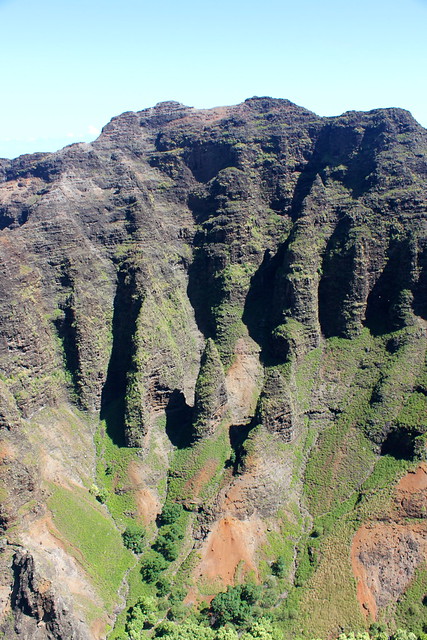 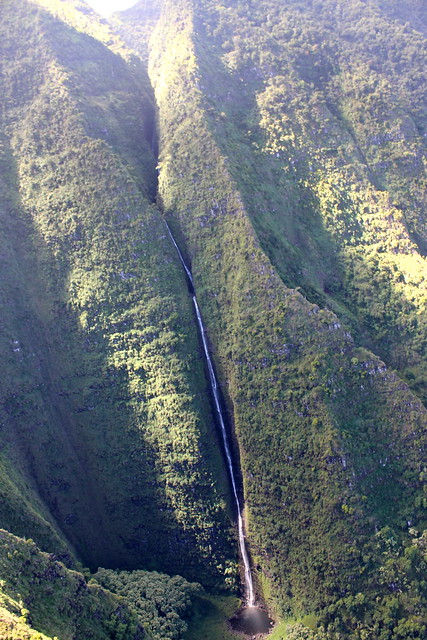 One of the most stunning views from the air is Tunnels Beach on the North Shore of Kauai.  It is a great place for snorkeling due to the reef you see from the air, nice and protected water full of fish and the occasional sea turtle if you are lucky. 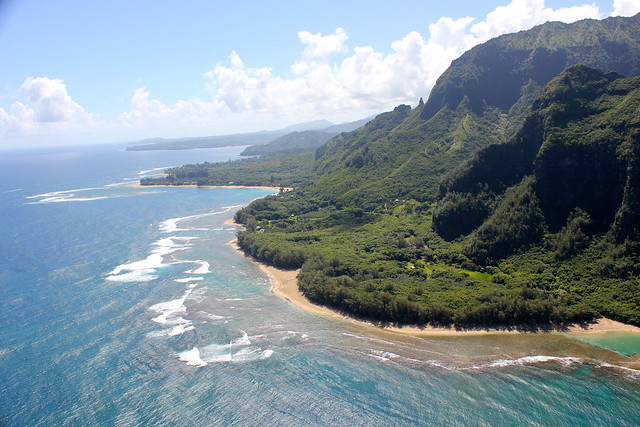 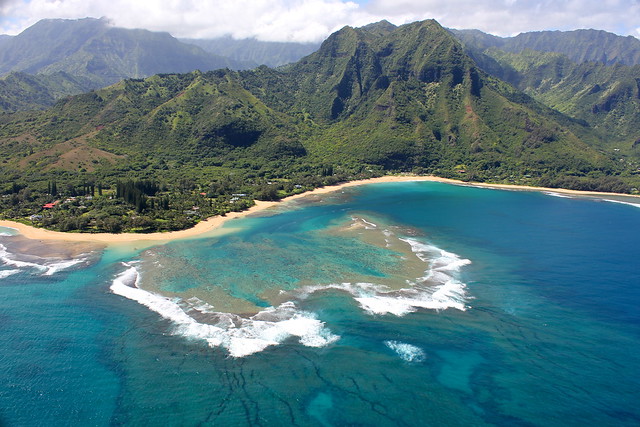 Next up on the North Shore, Hanalei Bay comes into view. 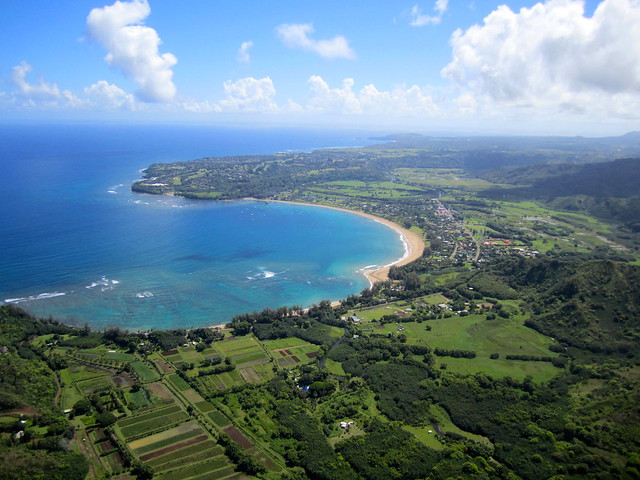 After all that beauty, the helicopter took us down into the lush green Mt. Wai’ale’ale Crater.  Our pilot swung the helicopter around and told me to get a picture of Alex with the waterfalls over his shoulder.  Before I realized it, I was leaning backwards to get a good angle and was hanging out of the helicopter.  I guess I forgot about that fear and that the belt would loosen with me!  But I did get a good shot. 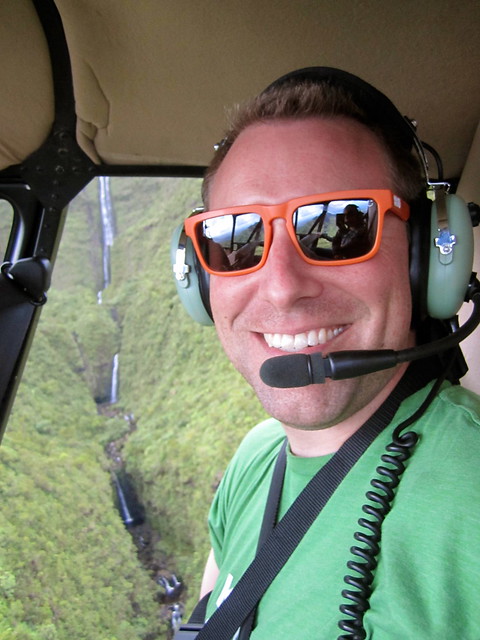 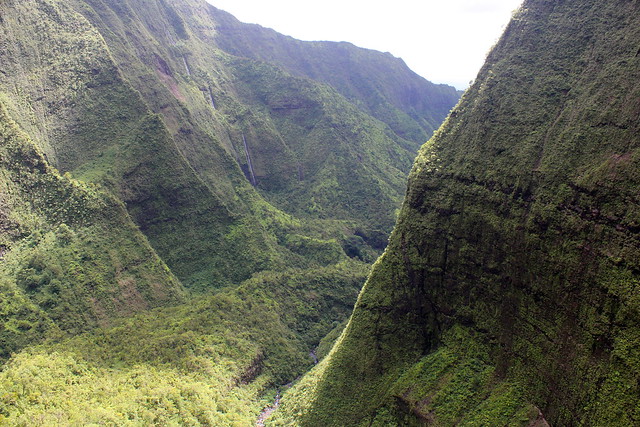 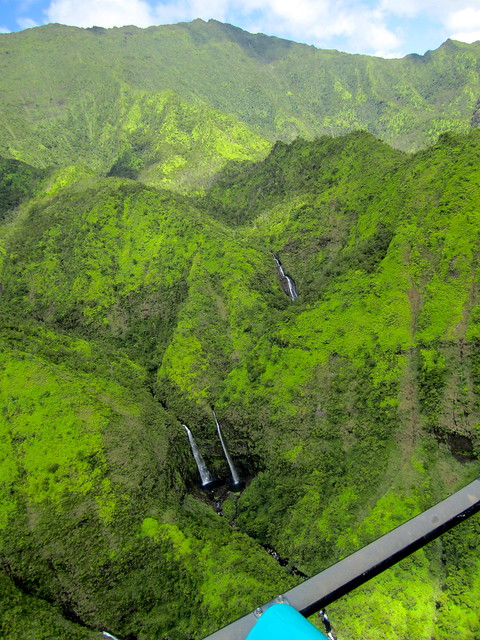 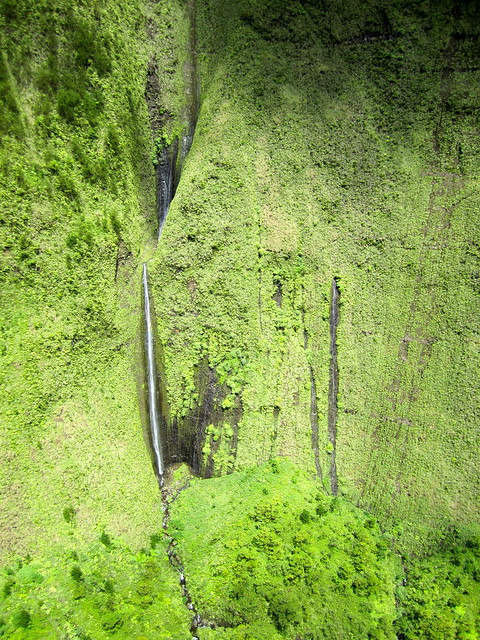 Our pilot also pointed out this recent mudslide that happened overnight. The landscape of these mountains of Kauai are forever changing and evolving thanks to Mother Nature. 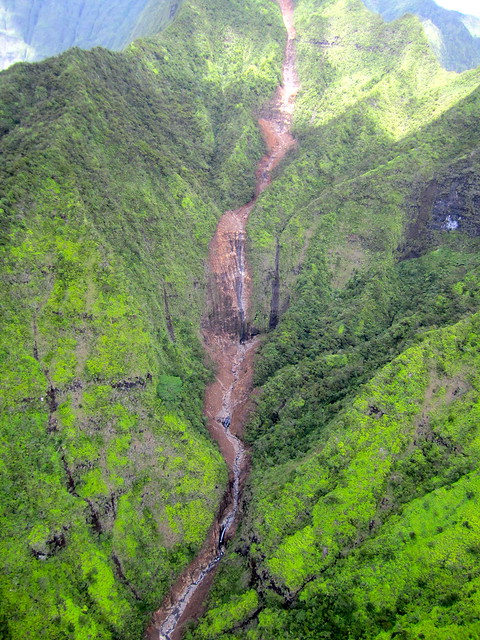 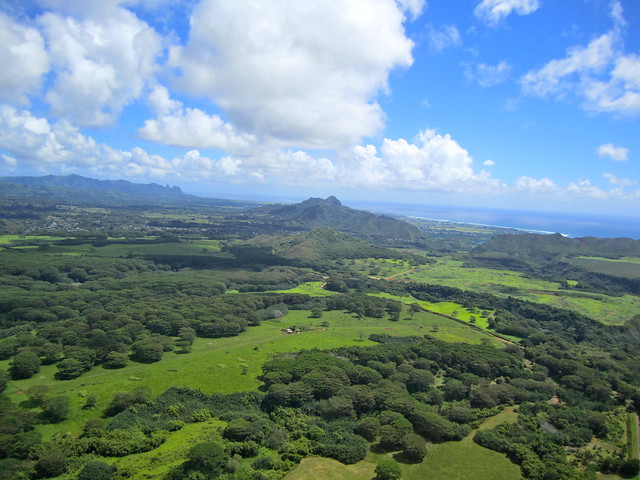 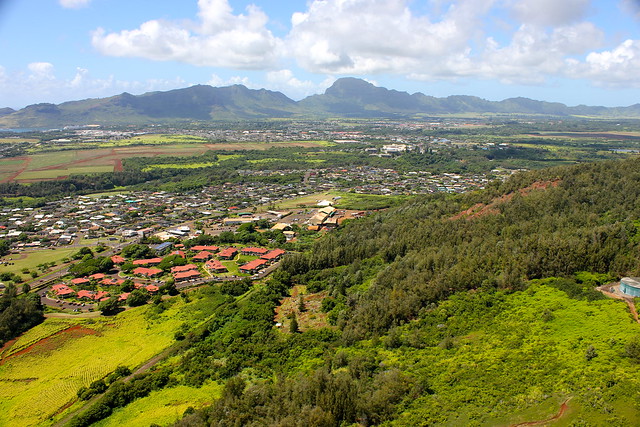 The hour went by so quickly and we were back in the ground.  I highly recommend starting all Hawaii trips with a tour from the sky on a doors off helicopter tour.  Great way to see the island before exploring it on the ground, with a Mai Tai in hand.